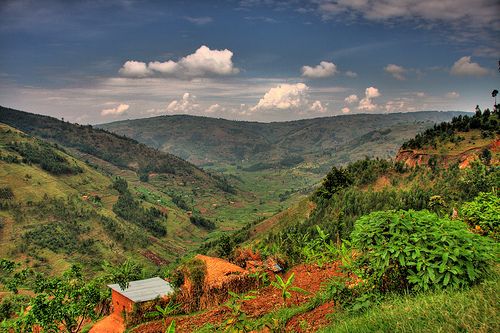 Rwanda has undertaken an ambitious project to grow 8 million trees to improve its green cover and aid local communities.

Over 2 decades ago, genocide and coinciding civil wars ravaged the small landlocked East African nation of Rwanda which also caused it to witness large-scale destruction of its ecosystem and forest cover.

In order to revive its green cover and to also prevent land erosions, the nation has launched an extremely ambitious 6-year plan called Green Amayaga Project. The project is valued at $32.7 million and it aims to promote biodiversity as well as boost agricultural productivity in order to benefit 1.3 million Rwandans. Thanks to this restoration drive, authorities aim to plant 8 million trees.

Project Coordinator Philbert Nkurunziza stated that a drive to plant 1.4 million trees was already underway, and was expected to be completed by next year.

“The tree seedlings to be planted are all produced locally within the established tree nurseries in the project intervention zones. Around 700,000 trees are being planted every month,” he also stated.

The project is supported by the UN Development Program and the Global Environment Facility. Rwandan officials have stated that the project aims to improve to the livelihoods of local communities, increase food security and agricultural productivity.

The government’s reforestation drive has also provided a boom to local nursery business owners such as Michel Munyemana, 45, who grows seedlings of numerous tree species in the Gasabo district in Kigali,  Rwanda’s capital.

Working on the side of the road by selling plants to those that pass by, Munyemana stated that the deforestation of his native district Bugesera a couple of decades ago spurred him on to grow saplings professionally.

“Bugesera was largely stripped off from trees for firewood and charcoal. I started tree planting to earn some money to survive. But now I derive great satisfaction from growing trees,” Munyemana said.

“One at a time we can restore trees that people have damaged. Even when one dies a tree is one thing a person leaves for posterity,” he also added.

Rwandan officials state that reforestation has the opportunity to help over 360,000 people, with the bulk being women. They also stated that it will restore the green cover in about 263,000 hectares of land, whilst also refurbishing over 263,000 hectares in order to make it suitable for agricultural activity.

Nkurunziza also highlighted that unlike other countries, locally grown species have been used to improve the green cover in order to ensure adaptability and suitability.

Ther are other green projects underway such as the Landscape Approach to Forest Restoration and Conservation in the four districts of Rubavu, Rutsiro, Ngororero and Nyabihu in western Rwanda and the Green Gicumbi in Gicumbi district.

However, according to Jeanne d’Arc Mujawamariya, Rwanda’s Environment Minister, the Amayaga Project is one that has been scaled up, as part of the efforts to invest in nature-based solutions.

“When it comes to adapting to the warming of our planet, Mother Nature is our best ally. Restoring forests and landscapes will not only benefit our environment but also improve the health and livelihoods of Rwandans and create green jobs. We are looking forward to seeing the Amayaga region green once again,” she said.

While local officials are assigned planted trees to monitor, daily farmers are also being trained to manage trees, according to Nkururnziza.

“Awareness campaigns towards the management of planted trees have started and we will continue to raise awareness among different stakeholders to ensure the [trees] survival and sustainability,” he added.

As reported by AA