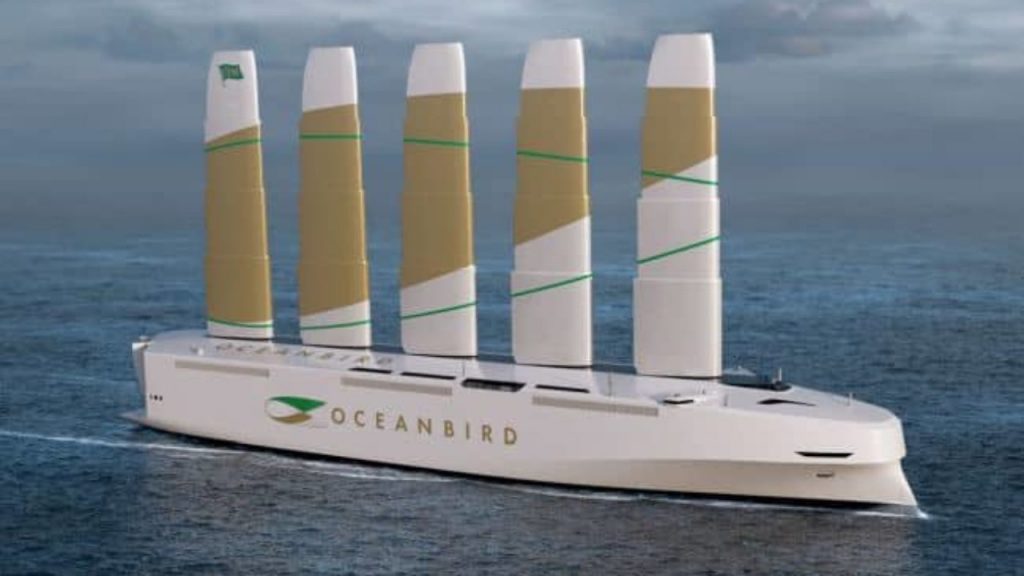 With a 90% reduction of CO2 emissions the world’s largest wind powered vessel brings a paradigm shift in sustainable shipping.

To some, Oceanbird appears as a ship from the future, however, it is reminiscent of a time in ancient maritime history. This is because it is powered by the wind.

It is a transatlantic car carrier which has been designed by Wallenius Marine, a Swedish shipbuilder, with support from the Swedish government and numerous other research institutions.

The 650-foot long vessel, with a 7,000 car capacity, is similar in size to conventional car carriers, however, it is to look extremely different. Oceanbird’s hull is to be topped by 5 telescopic wing sails, each measuring 260 feet tall. These wing sails are capable of rotating 360 degrees without having to come into contact with each other. The sales are retractable to about 195 feet so that the ship can seamlessly withstand rough weather or clear bridges.

The sails have been constructed from composite materials and steel. They have to be the size they are in order to generate propulsive power sufficient enough to move the 35,000-ton vessel. While “the general principles of solid wing sails is not new,” designing the Oceanbird’s sails is something that has been a bit of a challenge, according to Mikael Razola, a naval architect and research project manager for Oceanbird at Wallenius Marine.

This is down to the fact that they are the tallest sails to ever be manufactured. “This ship, at the top of the mast, will be more than 100 meters (328 feet) above the water surface,” states Razola. “When you move up into the sky that much, wind direction and velocity change quite a lot.”

In order to better comprehend the atmospheric conditions found at this height, Wallenius mounted numerous sensors on top of its existing vessels, gathering information on veer and wind velocity while they crossed the Atlantic. “All of this information has helped us design an efficient wing and hull system that can make the most of the power available in the wind,” says Razola.

Car carriers are integral elements in the world’s automotive trade, and they are colloquially known as RoRo or Roll-on, roll-off. Instead of the vehicles being loaded using cranes, which would be inefficient and slow, vehicles are rolled along using ramps that have been constructed into the vessel. A large, conventional RoRo typically uses an average of 40 tons of fuel each day, generating 120 tons of CO2 which is equivalent to driving a car 270,000 miles.

The shipping industry is being pressured to lower CO2 emissions and that of other greenhouse gases. Back in 2018, it was recorded that shipping accounted for almost 3% of global manmade greenhouse emissions, according to the UN body that regulates global shipping, the International Maritime Organisation or IMO. It was also in 2018 that the IMO introduced a mandatory 50% reduction of total yearly greenhouse gas emissions by 2050, with the end goal being to reach zero emissions “as soon as possible in this century.”

Oceanbird has been designed to surpass these targets, and Wallenius states that the ship will record a 90% drop in CO2 emissions over conventional car carriers. The reason why it won’t be completely emission-free is that it will still have to rely on engines for emergencies and for manoeuvring in and out from ports.

The Oceanbird is projected to have a speed of around 10 knots and that will make it slower than conventional car carriers which can move at about 17 knots. Rather than the 7 days, it takes a standard car carrier to cross the Atlantic, it will take Oceanbird about 12 days.