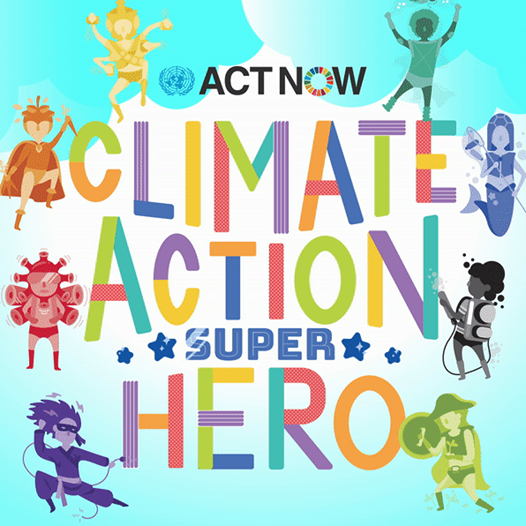 The United Nations has launched eight animated climate action heroes on its social media platforms to encourage children to protect the planet.

The campaign is aimed at children under12 and the purpose is to inspire them to develop daily habits that are environmentally friendly.

The Climate Action Superheroes campaign introduces children, their parents, and teachers to eight funky characters out on a mission to limit global warming and protect the environment.

“We want children to be aware of the difference they can make through everyday actions”, said Nanette Braun, Director of Campaigns in the UN Department of Global Communications.

“Lifelong behaviours are shaped at an early age and we hope that providing the knowledge and tools to help build a more sustainable future will have lasting impact.”

“By engaging children, we target the consumers and decision-makers of the future, who will drive the change the world needs.” ,” said Melissa Rancourt, Academic Director for the Global Executive Master of Science in Strategic Design and Management at The New School where the campaign concept was developed.

What we learn as young children stays with us throughout life and often lays the foundation of our behavior as adults. It is hoped that what the children learn from the eight animated characters will inspire them to save water, recycle plastic, save energy, and choose to eat more veggies.

The Veggie Vindicator teaches children that plant-based food has a lower environmental impact than animal-based food. Children are not asked to become vegetarians but to consider a balanced diet that incorporates all food groups. As an example, they are told that one 150 gram beef burger requires about 2,250 litres of water while a 725-gram cheese-and-tomato pizza requires around 1,216 litres of water.

The Recycle Ranger introduces children to the idea that recycling can reduce waste, for instance, that the recycling of paper in school and at home saves trees and water. They are given some facts to help them understand why it is important to put plastic, paper, metal and glass in the recycling bin.

Green Guide exposes children and their parents to the idea that they should buy fruit and vegetables that don’t look perfect. Why? Because if nobody buys them, they will be thrown on the garbage heap and become waste.

A shocking amount of food is lost, wasted or spoiled each year, representing a huge waste of resources like land, water, labour, and energy.

Fashion Fixer encourages children and their parents to buy fewer new clothes, shop for second-hand clothes, or to upcycle – that is making new clothes out of old clothes. This can also help to save water. Most people don’t realise how much water is used by the textile industry – it takes about 7,500 litres of water to make one pair of jeans!

Each climate action superhero gives children facts and suggests simple actions they can take to take care of the environment and become climate change heroes themselves.

Parents, children, and teachers can log onto the UN website and follow the superheroes on their missions in an animated world. There are activity sheets to download as well as certificates of completion, animated social media cards and stickers.